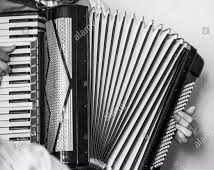 Howard was born March 18, 1929 in Flint, the son of Carl and Lillian (Haas) Finger.  He was a graduate of Flint Northern High School.  Howard served in the U.S. Army from 1951-1953.  He married Anna Wohleben on August 15, 1953 in Flint and she preceded him in death on October 21, 2019.  Howard was a musician.  He was the owner of Howard's Music Studio for 16 years, where he also taught accordion lessons. Howard also sold Real Estate.

He was also preceded in death by his parents and sister Deloris Hyde.  Tributes may be shared at www.sharpfuneralhomes.com

To send flowers to the family or plant a tree in memory of Howard Charles Finger, please visit our floral store.

You can still show your support by sending flowers directly to the family, or by planting a memorial tree in the memory of Howard Charles Finger
Share a memory
© 2020 Sharp Funeral Home & Cremation Center. All Rights Reserved. | Terms of Use | Privacy Policy