Occasionally, Sharp Funeral Homes & Cremation Center will be featured in the news and we will compile those stories below as they happen. Please check back often to see the latest! 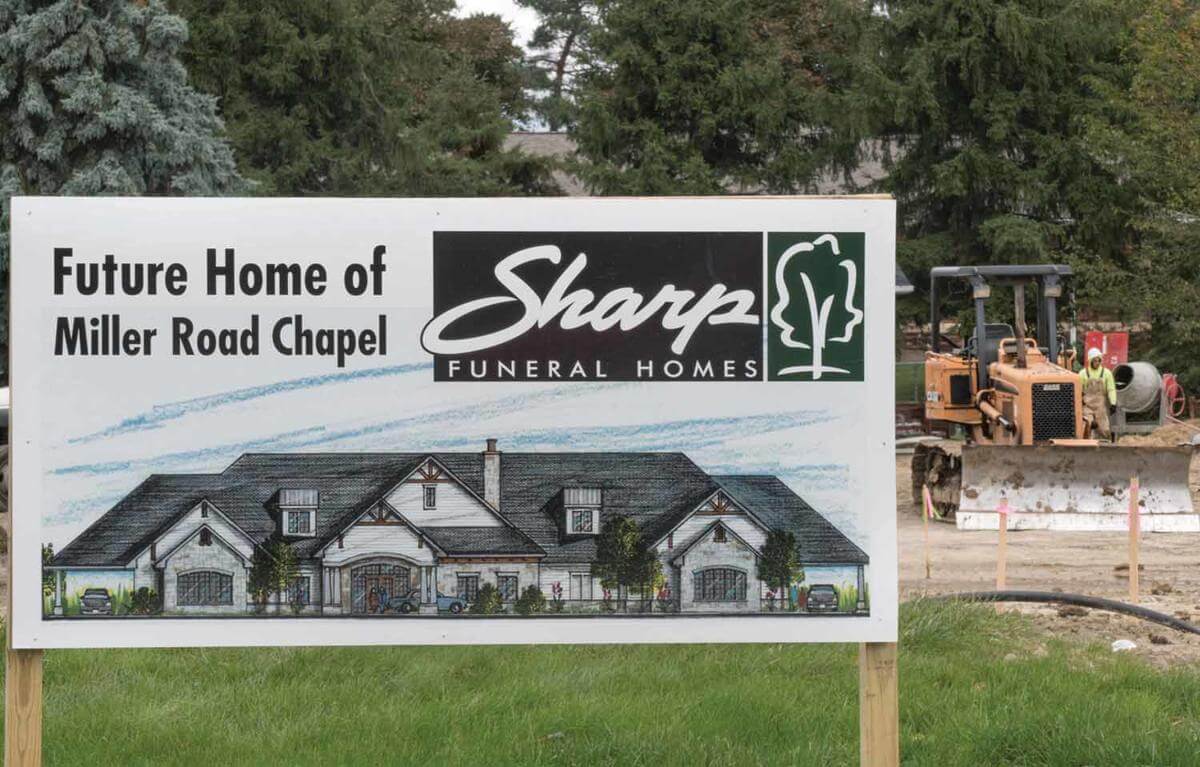 SWARTZ CREEK – Sharp Funeral Homes, Miller Road Chapel is thanking the Swartz Creek community for a year of support after the reopening of their facility last August. The Sharp family, who has been taking care of the deceased and their loved ones in the area since 1970, were forced to rebuild the 18,000 square foot building when it was destroyed in a fire in May of 2018. 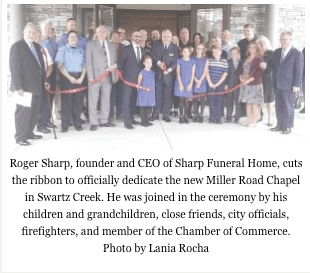 SWARTZ CREEK – Sharp Funeral Home, a landmark in Swartz Creek and Genesee County, has risen from the ashes and has returned to serving the community with the dignity and honor for which they have long been known.The Miller Road Chapel location suffered a devastating fire on May 16, 2018. At the time, Roger L. Sharp, founder and CEO, vowed to rebuild the flagship location. And, rebuild he has.Sunday, the Sharp Family opened the doors for an open house at the Swartz Creek location, 8138 Miller Rd., and introduced the new look to the public. 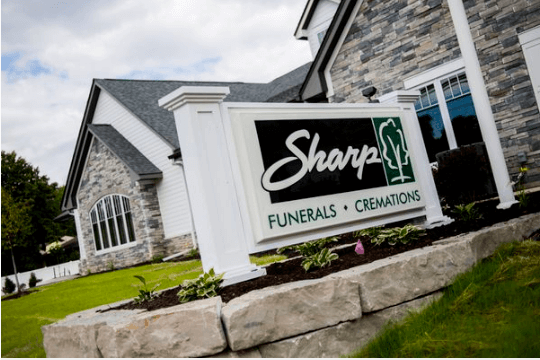 SWARTZ CREEK, MI -- Sharp Funeral Home in Swartz Creek celebrated its second chance at life Sunday.In May of 2018, the funeral home at 8138 Miller Road in Swartz Creek was destroyed in a fire, but founder and CEO Roger Sharp vowed to rebuild it.The Sharp family held an open house Sunday, Sept. 9, to celebrate the reopening of its rebuilt facility. The new building includes a new reception area, improved office spaces and work areas and modernized video and audio equipment. 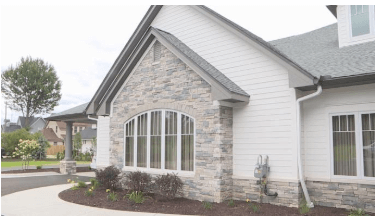 SWARTZ CREEK (WJRT) (09/08/19) - It was a place many mid-Michigan families turned to to provide final care for their loved ones for nearly five decades.That was until a devastating fire destroyed much of Sharp Funeral Home in Swartz Creek more than a year ago. The damage was so extensive, the Sharp family was forced to rebuild from the ground up.480 days later, the long wait is over, and the community is getting a fresh look at the state-of-the-art facility.

SWARTZ CREEK – Founder Roger Sharp, his family and employees will welcome the public to tour the new Sharp Funeral Home chapel in Swartz Creek from 1-5 p.m. Sunday, Sept. 8.The 18,500-square-foot funeral chapel, located at 8138 Miller Road, opened Aug. 12, 15 months after fire tore through the old building.Sharp has said he appreciates the outpouring of support he received from civic organizations, churches, the City of Swartz Creek and local families.

SWARTZ CREEK – A central fireplace, cathedral ceilings and ample, comfortable seating create a calming ambiance in the lobby of the new Sharp Funeral Home which opened Aug. 12, some 15 months after fire destroyed the former chapel in downtown Swartz Creek.Founder Roger Sharp, his family and employees, invite the public to view the new building during an open house from 1-5 p.m. Sunday, Sept. 8.The new facility measures 18,500 square feet, about 30 percent larger than the old funeral home, and features a stone and cement board façade. 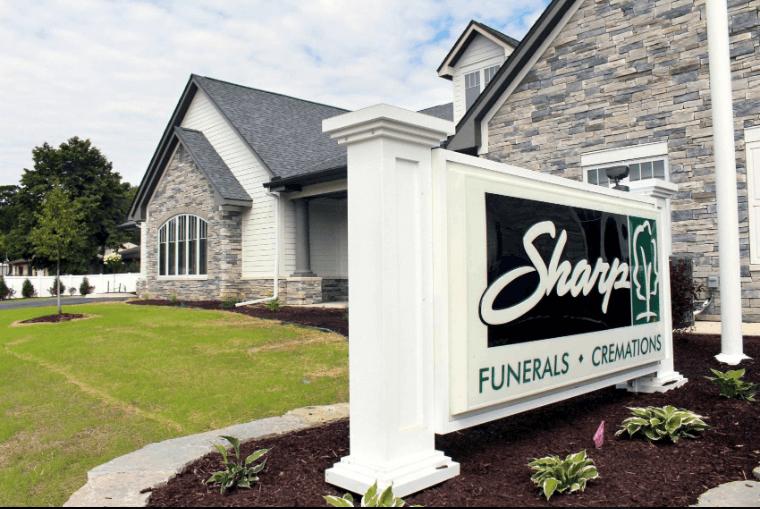 Sharp Funeral Home, a landmark in Swartz Creek and Genesee County, has risen from the ashes and has returned to serving the community.The Miller Road Chapel was destroyed by fire May 16, 2018. At that time, Roger L. Sharp Sr., founder and CEO, vowed to rebuild the flagship location. And, rebuild he has.On Sunday, Sept. 8, from 1 to 5 p.m., the Sharp family will open the doors for an open house at the Swartz Creek location, 8138 Miller Rd., and introduce the new look to the public. 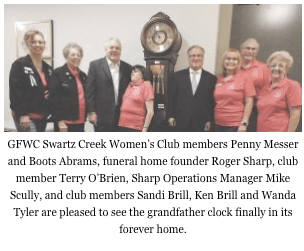 SWARTZ CREEK – The grandfather clock that has graced the lobby of Swartz Creek’s city hall has finally been moved to its forever home at the new Sharp Funeral Home.In the aftermath of the May 15, 2018, fire that destroyed the funeral home, the GFWC Swartz Creek Women’s Club went to work collecting donations from the community to replace the grandfather clock, as a gesture and symbol of support for funeral home founder Roger Sharp and his family.Club members presented the clock to Sharp on Dec. 8. Greg Burton and Lucas Lentner, of Frankenmuth Clock Company, relocated the clock Thursday. 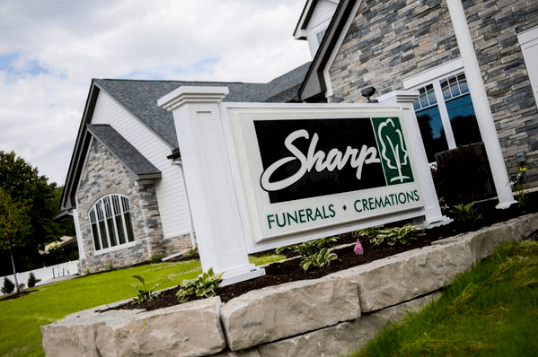 SWARTZ CREEK, MI -- A Swartz Creek funeral home has risen from the ashes after a fire destroyed the building over a year ago.The Sharp Family Funeral Home announced on Facebook Monday, Aug. 12, it has reopened in its “new state-of-the-art” building at 8138 Miller Rd, Swartz Creek.On the evening of Wednesday, May 16, 2018, firefighters responded to the funeral home at 8138 Miller Road for a commercial structure fire and encountered smoke and flames. 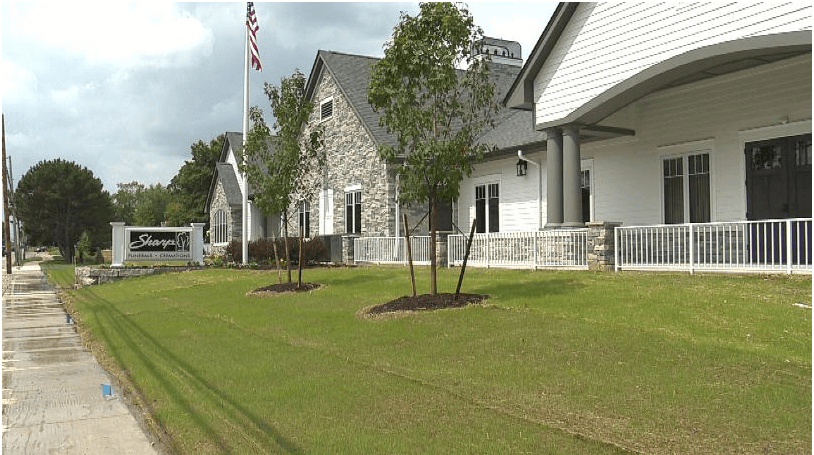 SWARTZ CREEK (WJRT) (08/12/19) -- Sharp Funeral Home in Swartz Creek has officially reopened after a fire destroyed much of the building a little more than a year ago."We're all very excited," said co-owner RJ Sharp.Sharp said lots of brainstorming and planning last year made for some stressful days. But in the end, it's all about the clients they serve."The building that we operated out of before began as an old house and was added onto throughout the years, so this building we were obviously able to start from the ground up and put in everything that we're looking for," he said. 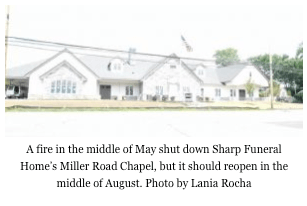 SWARTZ CREEK – Nearly 15 months after fire destroyed their Miller Road Chapel, Roger Sharp and his staff say they soon will reveal a beautiful new Sharp Funeral Home in downtown Swartz Creek. A date for the grand re-opening is yet to be determined, but the Sharp family is eager to give the community its first glimpse behind the grand façade.“The fire started in the middle of May and the building was a total disaster,” said Sharp, who also owns funeral chapels in Fenton, Linden and Grand Blanc Township. 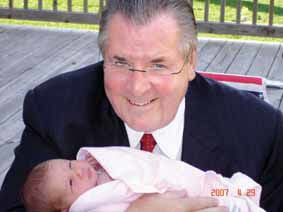 The tri-county area is rich with men who are wonderful fathers and grandfathers, those who are outstanding examples of how to live life to the fullest with respect and compassion for others, and show their own children how to do the same. Roger Sharp Sr., 75 is such a man and the patriarch of one of the most well-known and respected families in the tri-county area. He is the owner of Sharp Funeral Homes... 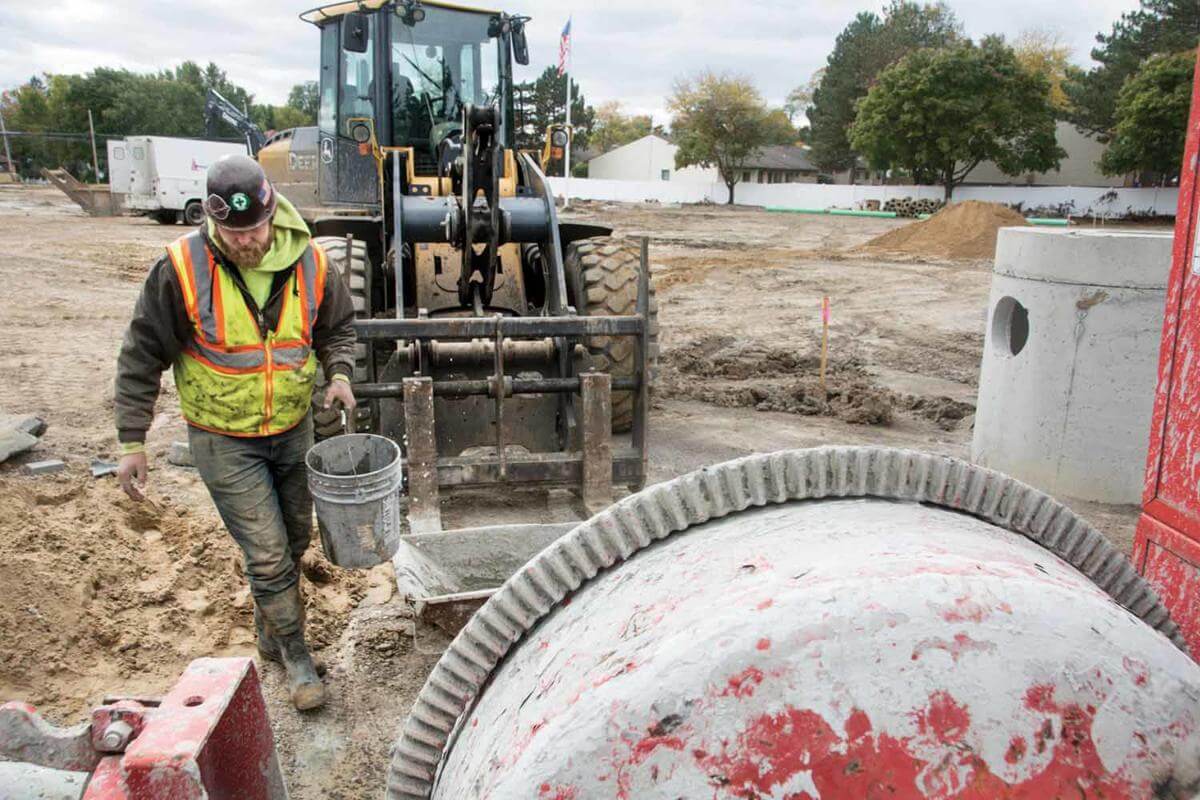 Swartz Creek — The Miller Road Chapel of Sharp Funeral Homes is completely gone. It was razed after a May 16 fire destroyed the building. As previously reported, Roger Sharp Sr. said the fire did approximately $3 million in damage. He bought the Swartz Creek property in 1969. There were 11 decedents in the building at the time of the fire, but Roger Sharp Jr. said they were all safely removed and moved to different funeral home, without affecting arrangements and plans.Rebuilding has begun... 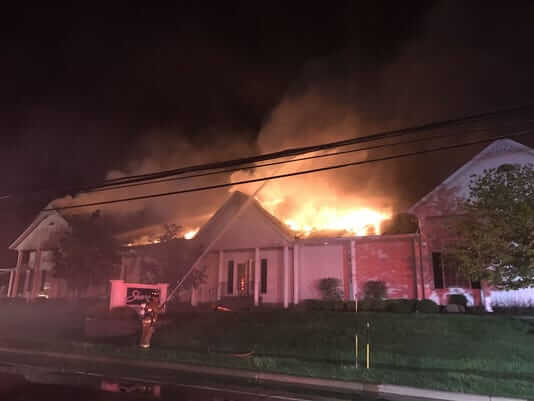 The owners of a Swartz Creek, Mich., funeral home are vowing to rebuild after a huge fire destroyed the 49-year-old facility Tuesday night. Eleven bodies being prepped for services were pulled out of the fire, all unharmed. Nevertheless, the family watched the building that was purchased in 1969 engulfed in flames and smoke ...