January of 2020 marks the first month of our Veterans Flag Raising Memorial Program. Each month, Sharp Funeral Homes will honor the life and memory of a veteran by raising the flag at one of our chapels in their memory. Each of our four chapels will display a framed biography of the veteran for the entire month, and the family of the veteran will receive a certificate of participation. 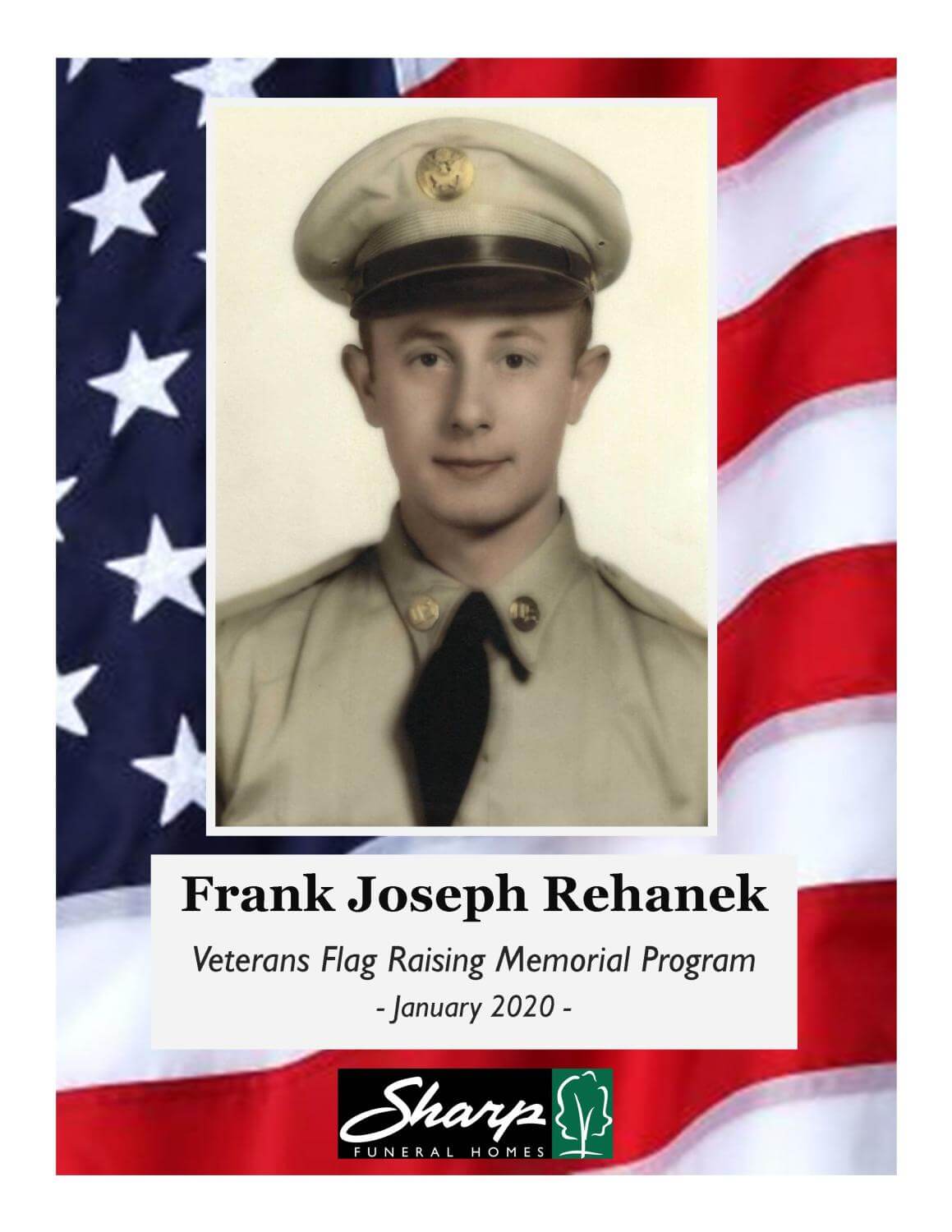 “Frank Joseph Rehanek was born in Lennon, Michigan on August 1, 1927. His parents came from Czechoslovakia and lived in New York City for a short time before coming to Swartz Creek where he was raised. Czech was spoken mostly at home, but he quickly learned English after starting school. He completed all of his schooling at Swartz Creek Schools.

“Shortly after graduating from MSU, he received his letter to report to the Army on October 13, 1952. After basic training, he found himself in Korea at the Yangju Valley. He was placed in the artillery, but because of a hearing deficit, he could not hear the codes to call them. By the way, when he had his initial military medical exam he was asked if he had any medical issues that might cause a problem for him. He told them about his hearing loss. The response was “claims hearing loss” on his examination paperwork. So, his next job was radio maintenance. He remained with his same unit. They did utilize his skills as a teacher and set up a school for him to work with soldiers who could not read or write. He enjoyed that job! His service time ended September 29, 1954. He received the United Nations Service Medal, National Defense Service Medal, Korean Service Ribbon, and Republic of Korea Presidential Unit Citation.

“After he returned home, he registered his teaching certificate at the Genesee County Office of Education. Daisy Howard was Superintendent of Education and was very happy to see him because there was a teacher shortage. She sent him to Atherton School for an interview and he began teaching the next day. He spent four years at Atherton before moving to Swartz Creek, where he taught at Mary Crapo and later became principal at Syring Elementary.

“We were married while Frank was at Syring. So often when we went out to eat or grocery shopping, former students and parents would stop us to talk about their memories of Frank. There was always so much love and praise for him. Frank was 41 and I was 32 when were married so I missed his army life and the early part of his teaching career, but I did learn about them because he shared so much.

“We had a wonderful daughter and we enjoyed raising her. When she married we gained a wonderful son-in-law. Now we have two beautiful granddaughters ages 16 and 13. Those girls idolized Frank and Frank idolized them. Both granddaughters have written about Frank on Veteran’s Day. Our older granddaughter had an assignment to write about a family member who had been in the military service. Of course, she chose her Grandpa (Papa). Our younger granddaughter interviewed her Papa to learn what it was like when he was her age. He was a wonderful storyteller and he touched and enriched the lives of his grandchildren.

“I think if Frank were here to add one more statement about his army life, he would add that he was happy to have had the experience of serving his country. He wished that all young men would have the chance to serve in the military. He believed you matured out of necessity. He also said you bonded with other soldiers and they became your brothers. You were responsible for them and they for you. You were learning what responsibility was all about. I remember him telling me a story about a time, after being home from the Army, he went to a wedding reception. He ended up leaving early because he could not stop thinking that he should still be in Korea serving next to his fellow soldiers. The feeling of responsibility and brotherhood was part of you as a soldier.” 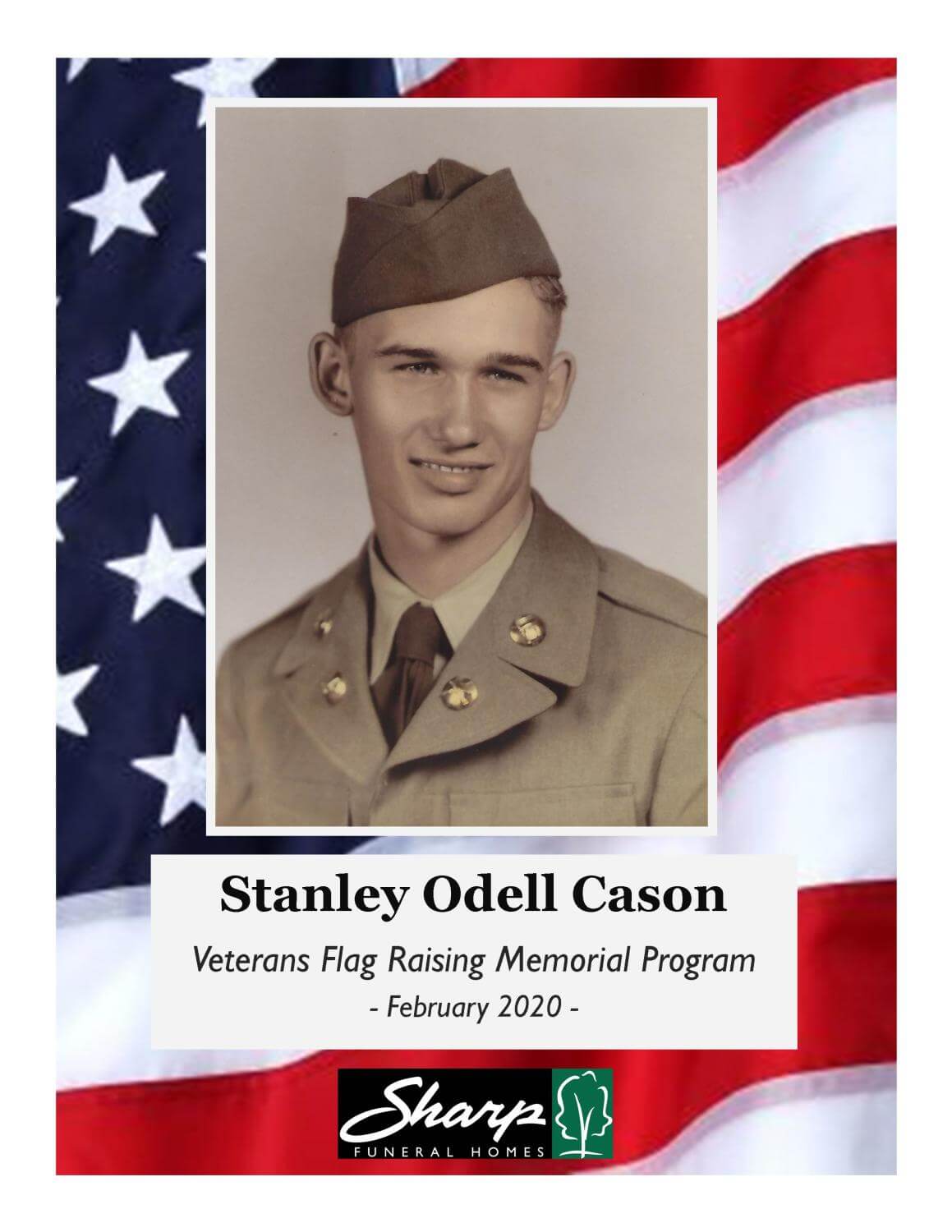 Stanley Odell Cason was born on August 11, 1933 in Batesville, Arkansas. His parents were Nolen and Alene Cason. Stan had three brothers, Neil (deceased), William, and Doyne (served in the Navy). Stan married Jean A. Pierce on July 1, 1966. Her children, Darcey and Gary became his and Stan and Jean raised them together. Stan died October 27, 2018 of dementia. Besides the above, he left his grandchildren, Nicole, Branden, Andrew, Derek, Thomas, John and Opal; also five great grandchildren.

Stan served in the Army from September 6, 1950 until September 5, 1953. His rank on leaving the Army was Corporal. While in the Army, Stan loaded and fired 105p millimeter howitzers in Korea and was a radio operator. He enjoyed his duty in Chicago as chauffeur for the higher ranking officers. He did not talk much about his actual experiences while in the Army. He did try to find some of his fellow comrades to no avail. He was awarded the Distinguished Unit Citation, Korean Service Ribbon, United Nations Service Medal, four Bronze Service Stars to Korean Service Medal. He was Headquarters and Headquarters Battery, 45th AA Brigade, Chicago, IL. 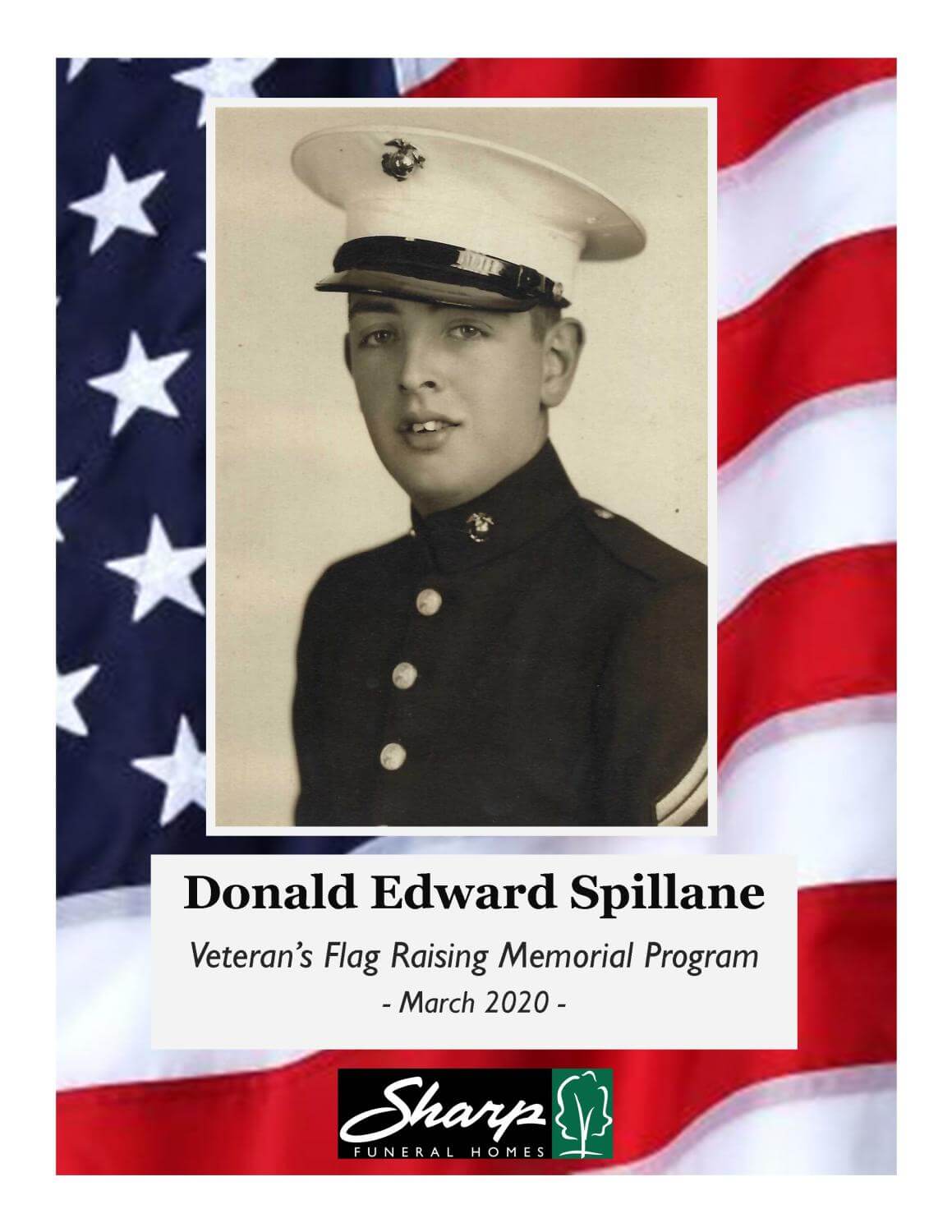 Donald E. Spillane was a lifelong resident of Swartz Creek. He was the son of Benjamin and Hattie (Kennedy) Spillane, and his family was among the earliest settlers of Swartz Creek, having come to the area in 1849. He was a 1943 graduate of Mary Crapo High School and was a Veteran of the U.S. Marine Corp from 1943-1946.

Don enlisted October 22, 1943 at the age of 17 years and 10 months. His father signed for him to join early and he celebrated his 18th birthday in boot camp at San Diego, California. After boot camp he was transferred to a Marine Aviation Detachment Unit in Jacksonville, Florida. There he was trained to become a flight crew radio operator. He eventually was assigned to the flight crew of a Douglas C47 Skytrain and deployed to the Philippines in the South Pacific. The crew of the C47 transported troops and cargo to various locations around the Islands in the South Pacific. 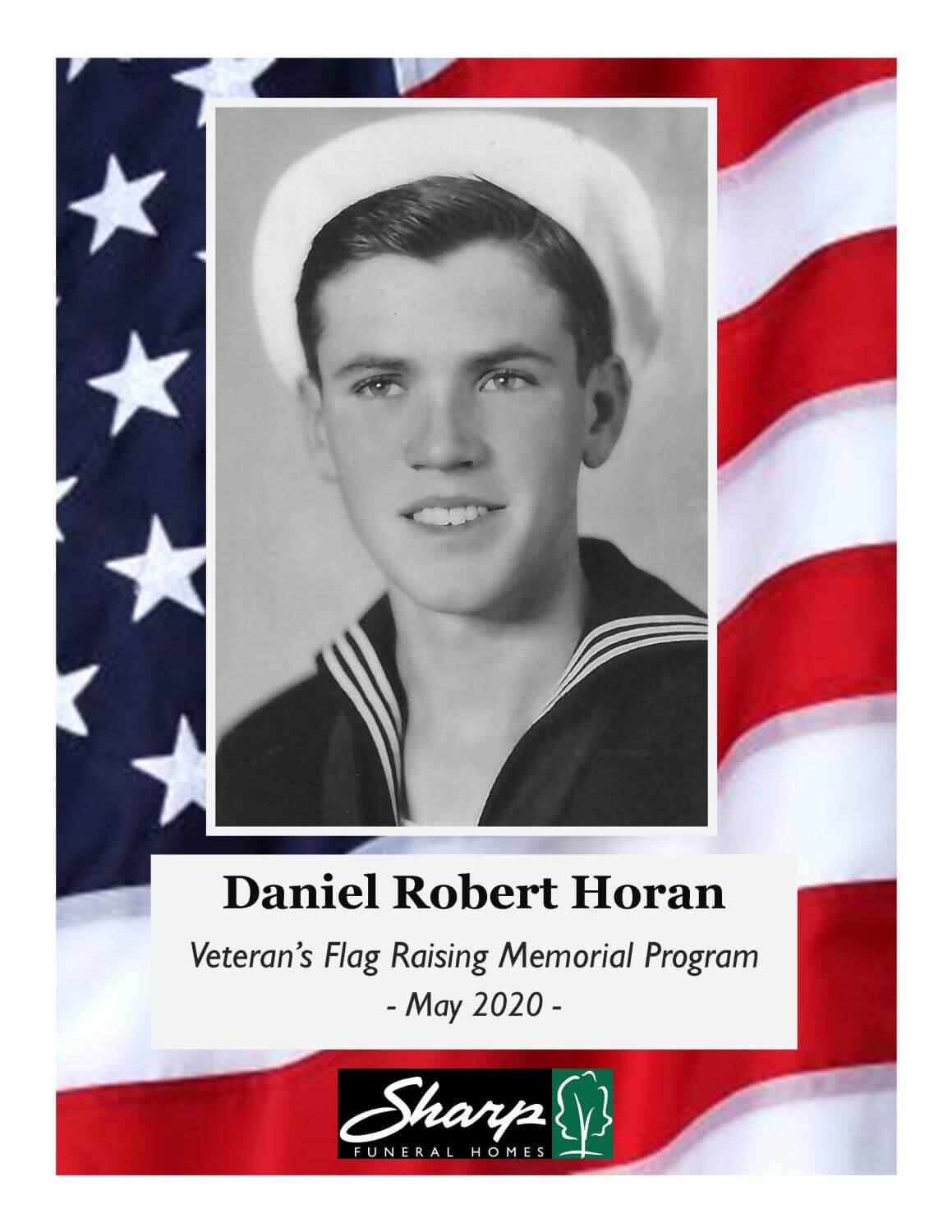 Daniel Robert Horan was born April 3, 1925 in Brooklyn, NY. He was the son of Daniel and Irene Horan. Daniel graduated from Mt. Loretto in Staten Island, NY.

On July 6, 1943, at the age of 18, Daniel enlisted in the U.S. Navy. He served in World War II and the Korean War and received the European African Middle Eastern Ribbon, Asiatic Pacific Ribbon, American Theatre Ribbon, and Victory Ribbon. He was on the deck of the USS Missouri when Japan surrendered to end World War II. Daniel served in the U.S. Navy until July 26, 1954.

Daniel’s work in Ft. Lauderdale, FL introduced him to his eventual wife, Margaret Thibault. On May 22, 1954, Daniel and Margaret were married in St. Ignace, MI, Margaret’s hometown. He was the father of six: Daniel Jr., Jeffry, Therese, Brian, Marcie, and Cathie. He was the grandfather of 11: Kali, Kurt, Kory, Stephan, Bruce, Carson, Cramer, Garrett, Michaela, Hunter, and Elli.

Before raising a family of six, Daniel spent his early married years working as an apprentice iron worker on a crew constructing the Mackinaw Bridge. He worked as an ironworker for Ironworkers Local #25 for 32 years. In addition to his work on the Mackinaw Bridge, he worked on the building of the Verrazzano Bridge in Brooklyn, NY and the Poe Lock in Sault Saint Marie, MI.

In 1970, the family moved to Fenton, MI so he could be closer to work in Detroit and have more time to spend with his family. His daughter Marcie recalls, “His family was the motivation for everything he did, and we liked that he was around more because he always had such a great sense of humor. He loved to tell jokes and make the best out of a bad situation.” Daniel was a member of the VFW Post 3243 in Fenton, Fenton Moose Lodge, Fenton Eagles, the Knights of Columbus and American Legion, both of St. Ignace. He was a parishioner of St. John’s Catholic Church in Fenton. 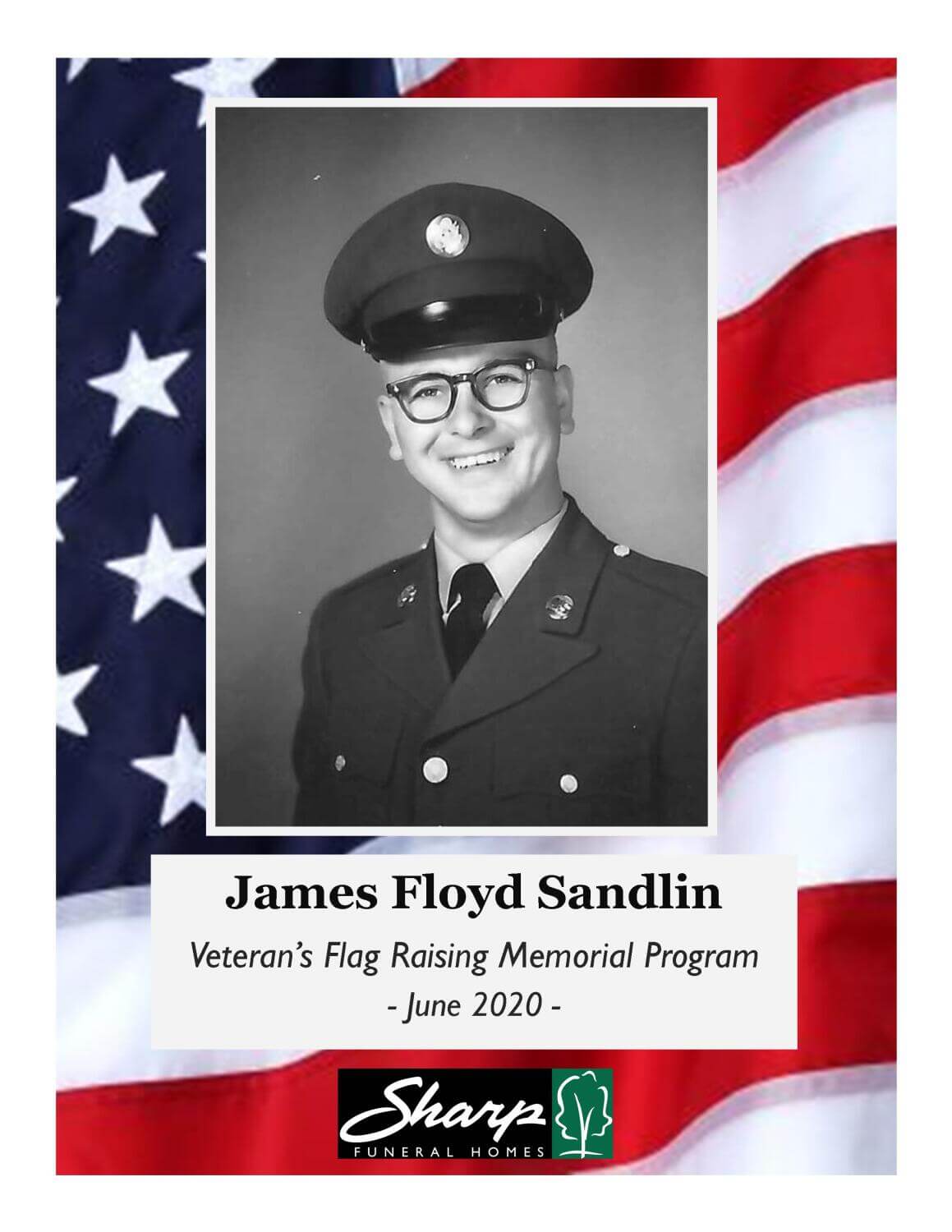 James Floyd Sandlin was born on June 9, 1944 in Russellville, KY. He was the fifth of nine children. When he was 4 years old, his father was killed in an oil well explosion at his job in Tennessee. His youngest brother was born after his father died. Life was harder than usual for their family after that, and unfortunately Jim had to leave school after 7th grade to help support the family. When he was 21, in order to better himself, he joined the Job Corps. He was sent to the Hoxey Job Corps near Cadillac, Michigan, in 1965. After graduating from there, he spent a few months in the Peace Corps in Oregon and then got a job in Cadillac. He met his future wife, Judy, in Cadillac.

The Vietnam War was going on, and Jim knew he would be drafted, so he enlisted in the Army on February 13, 1967. He completed Basic Training at Fort Knox, Kentucky. Before being sent to Fort Bliss, Texas, he came back to Cadillac and got married on April 29, 1967. From Texas he was sent to Fort Eustis, Virginia. Judy joined him there, and before he was sent to Vietnam on October 25, they were expecting their first child. He was 23 years old, older than most of the guys being sent there who were only 18, 19 or 20. He would not meet his first daughter until she was 6 months old. The Red Cross had to inform him when she was born.

While in Vietnam, Jim worked on Lark 60 amphibious vehicles taking supplies of food and ammunition to various camps along the river. He spent a lot of time in Qui Nhon and Bong Son. He said it was a beautiful country, but you never knew if a Vietnamese person next to you was a friend or an enemy, even the children.

Jim’s unit was only attacked by the enemy a couple times, but it was enough to cause him to have nightmares and PTSD when he returned home. He was also exposed to Agent Orange which caused many health problems later in his life (diabetes, COPD, neuropothy, etc.). And, adding to his trauma, he was with another soldier who was electrocuted while they installed an air conditioner in the mess hall. That soldier lost his life. His wife was also expecting their first child.

Jim returned on October 24, 1968. He never felt that anyone welcomed him home or thanked him for his service until many years later. He spent another year in the Army at Fort Eustis where he and Judy had a son. He was honorably discharged on February 12, 1970. He and his family returned to Cadillac and the job he had left to serve his country. He was honored to serve, but was never convinced that we should have been in Vietnam. He found veteran’s groups to be a part of which gave him other veterans to talk to and some peace about it. He and Judy went to veteran’s reunions in Kokomo, Indiana for a few years, and he also found much joy in playing Santa for many years. He was a Christian who loved the Lord and wanted everyone else to know Him also.

During his time in the Army, Jim earned the National Defense Service Medal, the Vietnam Service Medal, the Sharpshooter Badge (M-14 Rifle), the Expert Badge (M-16 Rifle) and the Republic of Vietnam Campaign Medal with 60 Device. He served for three years. He left his service with a SP-4 rank.

Jim and Judy were married for 41 years. They had another daughter in 1971 and adopted a two year old son in 1979. Unfortunately, Jim passed away at 64 years of age on November 1, 2008 after battling with health problems from Agent Orange. They had two grandsons and five granddaughters when Jim passed away. Three more granddaughters have been born since. He was a wonderful husband, father, and grandfather. We all miss him very much. - Judy, Julie, Jeremy, Jacqueline, John, Ryan, Brendan, Kathleen, Emily, Alyssa, Lily, Maya, Jordyn, Chloe and Hope.